As the season of Autumn begins and the weather cools (hopefully here), I'm drawn to the hues of orange and brown and the scents of cinnamon and pumpkin spices. I've been leafing through my magazines and cookbooks looking for new recipes. Probably my go to fall favorite is pumpkin bread which I will feature later this month.
In two weeks my town will hold an Antique Fair downtown with one hundred booths selling vintage items. Last year I bought a beautiful citrine sterling silver ring at the fair. Hopefully there will be much more tea ware this year. There are very few antique and thrift stores in my area so I look to ebay and etsy for my shopping needs/wants.


Today's featured teacup is one I found on ebay.

"Autumn stars shine through gaps in the walls...He ...brews midnight tea by the stove's ruddy light."
~From a Taoist song, quoted in The Chinese Art of Tea by John Eaton Bloefeld 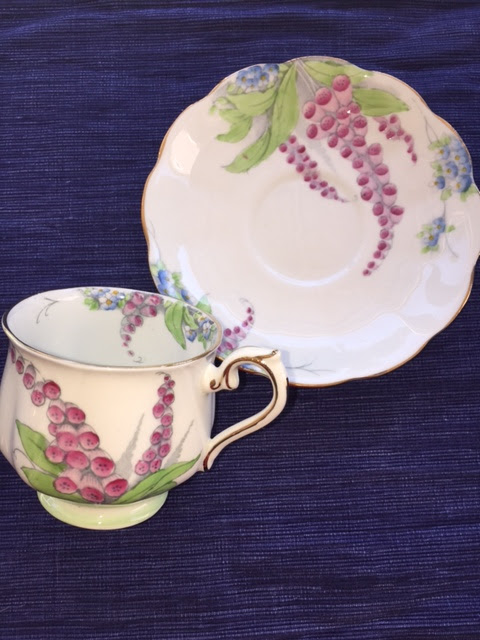 This is the oldest Royal Albert in my collection.
I was drawn to the cup's unusual shape. 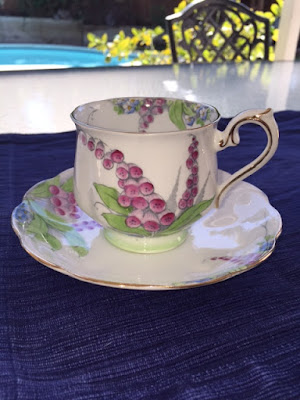 Royal Albert is very teacup collector friendly. Most of their teacups feature the name of the pattern on the cup's bottom. With this teacup being older on the older side, the pattern name is missing.  I went to a Royal Albert patterns website to look for information about this particular teacup. 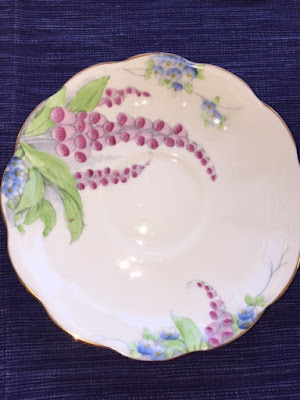 It is a slooow site, but I learned this pattern is titled
Un-Named Pattern #95
The pattern is described as Hollyhocks or Foxglove. You can see the other teacups in this pattern. 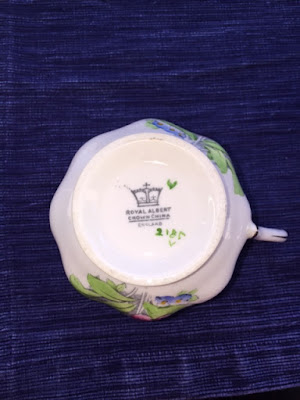 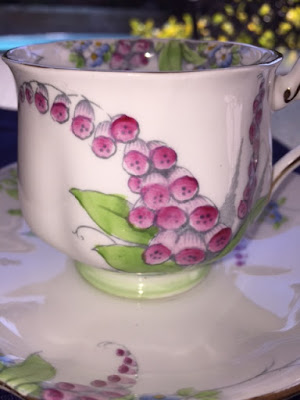 I really appreciate the artistry in this teacup. I have very few hand painted teacups.

Our fine teacups deserve a fine tea!
My coffee friends enjoy going to Peet's Coffee and since I'm not a coffee drinker, I've had to find a tea that I would enjoy there.
Snow Leopard is a wonderful white tea whose flavor bridges the seasons from summer to autumn. 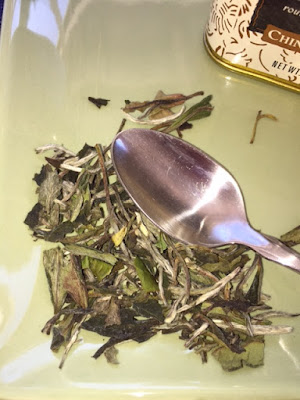 Snow Leopard is a Bai Mu Dan white tea which is described as having smooth flavors of hints of herbs, fresh grass and flowers and white grape sweetness. 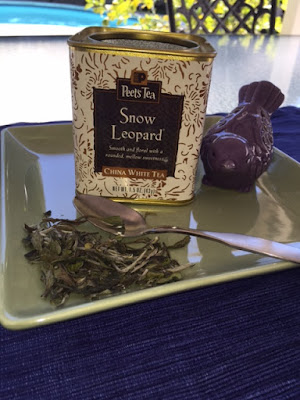 Its liquid color is pale yellow and has almost an oolong taste.
This is the second loose tea I purchased from Peets and I've been pleased with both.
Come by next week and find out who gave me my cute new purple feathered friend!